The Green Park Hotel, Pitlochry - Out and About

The county of Perthshire lies at the geographical heart of Scotland, and Pitlochry is a small Victorian town set in its centre. It lies in a natural amphitheatre just north of Dunkeld where the highland hills first rise out of the Strathmore Valley. 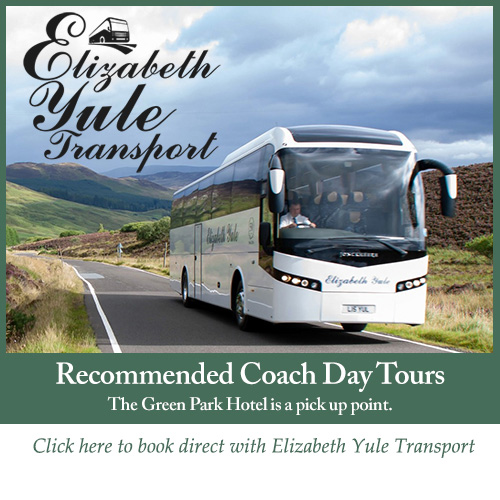 It is a much loved place for it has the flavour of Scotland: clean air, clean stone houses, tumbling streams and rounded heathery hills. Roads radiate from the town to Braemar and Balmoral; to the wide, fertile Strathmore Plain; over the Tay to the Kingdom of Fife and the East Neuk villages; to Oban and the West through Dark Glencoe. There is fishing for salmon and trout in the Tummel; pony trekking at Blair Castle; good golf on the Pitlochry Course with Gleneagles, Rosemount, Saint Andrews and Carnoustie all within easy reach.

Occupying such a crucial crossroads, Perthshire has over the centuries witnessed some of Scotland's most historic events, and links with many of them are still preserved in its landscape, buildings, place names, and culture. To chose just some examples -

•    Scone Palace where 42 Scottish Royal Sovereigns were crowned on the Stone of Destiny.

•    Killiecrankie, the scene of Bonnie Dundee's great victory in 1689.

•    Roman Scotland is represented with Ardoch Roman Camp near Auchterarder,

•    The Pictish Stone Collection at Meigle Museum near Blairgowrie.

•    The Scottish Crannog Centre, where archaeologists have reconstructed one of the dwellings that once ringed the edge of Loch Tay some 2,500 years ago.

•    Alternatively, you can visit the places that captivated Queen Victoria: Queens View by Loch Rannoch originally named after the wife of Robert the Bruce,

•    Dunkeld - a former Scottish capital, with its cathedral on the banks of the Tay founded in 1107.

It is in its castles and stately homes that Perthshires history truly comes to life - from Castle Menzies by Aberfeldy where Bonnie Prince Charlie stayed on his way to defeat at the Battle of Culloden, to Blair Castle where the Duke of Atholl commands Britain's last private army.

From Pitlochry you can visit a castle set on an island in Loch Leven where Mary Queen of Scots spent a year in captivity, or you can visit Drummond Castle Gardens in Crieff and see copper beech trees planted by Queen Victoria.

Perthshire is blessed with wide open spaces, interesting ports of call, beautiful scenery, and a diverse range of wildlife, flora and fauna. Trees and forest dominate the landscape - from Europe's oldest tree at Fortingall in Glen Lyon, to the Giant Redwoods at Cluny Gardens by Aberfeldy. Acres of gardens and walks are open to the public, from the National Trust's Branklyn Gardens in Perth, to the Pass of Killiecrankie Centre just to the north of Pitlochry.

To choose some other examples of attractions to visit during your stay at Pitlochry, the Hermitage Woodland Park contains numerous native and exotic trees of awe inspiring height - the path through these leads to Ossian's Hall, a folly built by the 2nd Duke of Atholl's nephew. Here one can view the River Brann and the roaring waterfall below - a spectacular sight.

The tranquil Loch of the Lowes Observatory with its nesting Osprey, offers a contrast to towering Schiehallion and Ben Lawyers, Perthshires highest mountain at 3984 feet.

Rannoch Station, at the west end of Loch Rannoch is as far west as one can drive, and gives magnificent views over the wild Rannoch Moor to Glencoe and the Grampian Mountains. From here you can take the train for a day trip to Fort William and the West Coast fishing port of Mallaig.

Just a mile or so north of Blair Castle, the Falls of Bruar provides a spectacular setting for a romantic walk along well-maintained paths to view the fine waterfalls. On a more prosaic footing, The House of Bruar at the same site, is a new concept in shopping in the area. There is a Food Hall, Cashmere Shop, Golf Shop, and Garden Shop, earning it the modest accolade of the 'Harrods of the North'.

Highland Perthshire is arguably the perfect place to take a fresh look at Scotland's past and to discover what's best of its present. So, however you choose to spend your time here, we hope that you will go home laden with wonderful memories, and filled with plans for your next visit to Pitlochry and Perthshire.